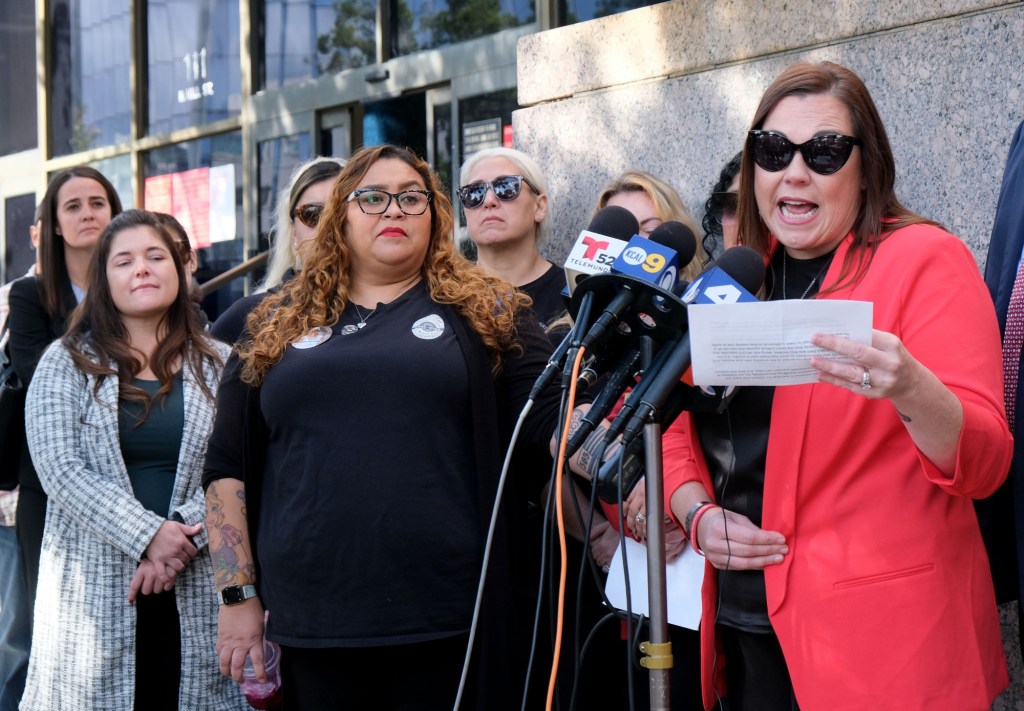 The family of one of the two El Monte police officers killed in a June ambush at a motel said they’re planning to sue Los Angeles County District Attorney George Gascón and the Probation Department for failing to jail the shooter in the months prior to the attack.

The wife of Corporal Michael Paredes, his two sisters and their attorneys said they sent a claim to probation officials Tuesday, Nov. 29, accusing them of failing to heed multiple warnings that Justin Flores had returned to using drugs, had obtained a gun and recently had beaten his girlfriend.

According to the claim, probation officials received a call about Flores’ drug use and violent behavior about two weeks before he shot Paredes and Officer Joseph Santana inside his motel room at the Siesta Inn on Garvey Avenue on June 14. At around the same time, Flores’ mother also called his probation officer to report that her son had resumed using drugs in March 2022.

Flores was on probation at the time of the shooting for a conviction two years earlier for being a felon in possession of a gun. In the claim, attorneys for the Paredes family said Flores’ probation officer called him the same day as the report of his drug use came in. The officer attempted to set up a meeting on June 6, but Flores never showed.

After shooting both officers inside the motel room, Flores exited and was confronted by more police. After exchanging fire with them, he shot himself to death.

Mark Peacock, an attorney for the Paredes family, said those reports should have led to Flores’ probation being revoked.

“This guy should have been in jail,” he said outside the Stanley Mosk Courthouse in Downtown L.A.

According to the claim, Flores’ first conviction was for vehicle theft in 2009. Over the next two years, he was convicted of drug possession, a misdemeanor hit-and-run, resisting arrest and burglary. From 2011 to around 2019, Flores was convicted of a string of minor drivers license violations, but no charges for violent crimes.

Flores’ criminal history became the focus of renewed criticism of Gascón, whose reforms of the D.A.’s office led to a rebellion among some prosecutors in his office, as well as an unsuccessful recall effort earlier this year.

One of his reforms enacted on his first day in office in 2020 was to ban line prosecutors from filing strike allegations allowed under California’s controversial “three strikes” law. By March that year, Flores had been caught with a gun; under Gascón’s directives, he was sentenced to 20 days in jail, 30 days of community service and two years of probation.

A strike for gun possession could have gotten Flores up to three years in jail. But even with the strike enhancement, it’s not clear exactly how long of a sentence prosecutors would have been able to get if they had offered Flores a plea deal, as they did at the time, allowing him to plead “no contest.”

Still, Gascón’s policy for strikes was thrown out by a judge in 2021. On Tuesday, the Paredes family faulted this policy for allowing Flores back out on the street.

“My children and I are trying to pick up the pieces of our shattered lives,” said Janine Paredes, who met Michael Paredes in high school in El Monte. The couple was married for more than 20 years and had two daughters.

The Paredes’ claim Tuesday was not a lawsuit. Claimants seeking to sue government officials must send a tort claim first before moving forward in the courts.

Probation officials said they would not comment on the Paredes’ claim, saying they “extend our deepest condolences to the families and loves ones of the two heroic El Monte Police Department officers.”

The D.A.’s office said they had not received the claim as of Tuesday. But they called the killing of Michael Paredes “a devastating loss to both his family, friends and the community he bravely served.”